He lives in Indianapolis, IN with his family and proudly hails from Salinas, CA. Rob enjoys travel, scuba diving and making a difference in the lives and careers of individuals. Learn more about Rob in this excerpt from Campfire Leadership™:

“When I was 13 years old I lived with my father, who was in the Army and stationed in Anchorage, Alaska. During the summer months, we would spend most of our weekends fishing on the Kenai River. This was in the Kenai Peninsula, just south of our home in Anchorage. My father would fish for king salmon on the river and my brothers and I would fish for trout in the stream that flowed into the river.

Those were some of the greatest years of my life!

After spending a long day of fishing and goofing around, we would always end up at the campground’s nightly campfire. We would spend hours listening to the fishing stories of the adults who almost landed the ‘big one’ while fishing that day. They were great stories about adventure and the perils of living in Alaska. The life lessons taught around that campfire were lessons I still follow today.

The leadership I learned from those men around that campfire would prove to be invaluable later in life.Years later, I find that I want to be the kind of leader that I saw in those men. They gave such great advice and insight during those nights just sitting around those campfires.

I was drawn to their leadership and realized that there were four basic styles of leadership: the Torch leader, the Disco light leader, Spotlight leader and Lighthouse leader. Each of these exhibit myriad strengths and weaknesses and it’s only when a balance of all four styles meet do we have a truly enlightened leader, the Campfire Leader.” 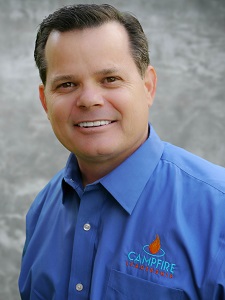 For more information about how Rob Jackson can inspire significant positive change in your organization, please contact us

Let us show you what understanding personality styles can do for your team!